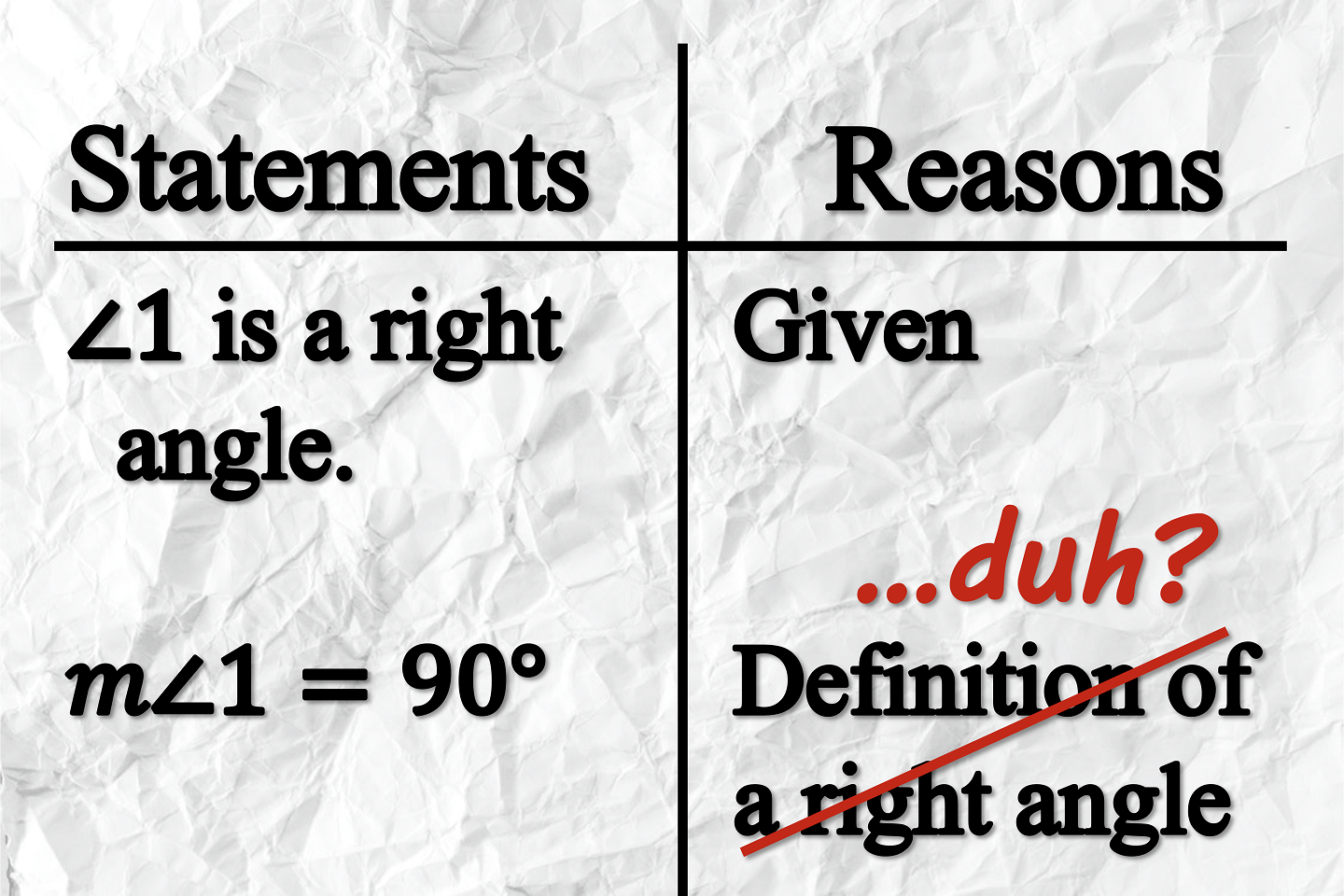 It really has been a while since I've posted here, hasn't it?

But I suppose having a mini-crisis in my geometry class that has forced me to reject our textbook's philosophy on what "proofs" should be is a good enough reason to resurrect this blog.  I finally have the time this year, and I feel the need to share my probably overly opinionated beliefs about math education.

This is the first year I have tried to integrate proofs into our school's geometry curriculum across the board.  (In the past, proofs were only discussed in honors classes, but I felt somehow that reasoning through how you knew something was true was important for everyone.)  I was trying to justify the two-column format, as much as I hate it, as a way to "scaffold" student thinking --- yay educational buzzwords!  But when I actually did it, it got exactly the reaction that I knew it would --- it just served to overly obfuscate the material and utterly drain the life out of it.  I realized I should have stuck to my guns and listened to the likes of Paul Lockhart and Ben Orlin.

So, after some reflection and course correction, here's the email I just sent my students.

Hello mathematicians. I have a rather bizarre request.

Don't do your geometry homework this weekend.

Yes, you read that right. Don't.

We've spent the past couple of days looking at "proofs" in geometry. The reason I say "proofs" in quotations is that, in all honesty, I don't believe the two-column proofs that our book does are are all that useful. I have actually been long opposed to them, but against my better judgment, decided to give them a shot anyway and make them sound reasonable. But you know what they say ... if you put lipstick on a chazir*, it's still a chazir. (They do say that, right?) The thing is, that style of proof just ends up sounding like an overly repetitive magical incantation rather than an actual logical argument --- as some of you pointed out in class today. I truly do value that honesty, by the way, and I hope you continue to be that honest with me.

Here is what I actually will expect of you going forward. It's quite simple:

I expect you to be able to tell me how you know something is true, and back it up with evidence.

It may be a big-picture kind of question, or it may be telling me how we get from step A to step B, but when it really comes down to it, it's all just "here's why I know this is true, based on this evidence". It doesn't have to be some stilted-sounding name like the "Congruent Supplements Theorem" either --- just explain it in your own words. That doesn't mean that any explanation is correct --- it still has to be valid mathematical reasoning. You can't tell me that two segments on a page are congruent because they're drawn in the same color, or something silly like that. But it doesn't have to be in some prescribed way --- just as long as you show me you really do understand it.

With that in mind, by the way, I'm also not going to be giving you a quiz on Monday, either. Instead, we're going to focus on how to make arguments that are a lot more convincing than just saying the same thing in different words. I think you'll find that Monday's class will make a lot more sense than the past few classes combined.

So, relax, take a much-deserved Shabbat, and when we come back, I hope to invite you to see geometry the way I see it --- not as a set of arbitrary rules, but as something both logical and beautiful.

*  I teach at a Jewish private school.  "Chazir" is Hebrew for "pig", which has the added bonus of being non-Kosher.  Two-column proofs are treif... at least in the context of introductory geometry.

P.S.  I am not saying that two-column proofs NEVER have a place in mathematics.  I am merely saying that introductory geometry, when kids are still getting used to much of geometry as a subject, is not the proper place to introduce the building of an axiomatic system.  Save that for later courses for the students who choose to become STEM majors.