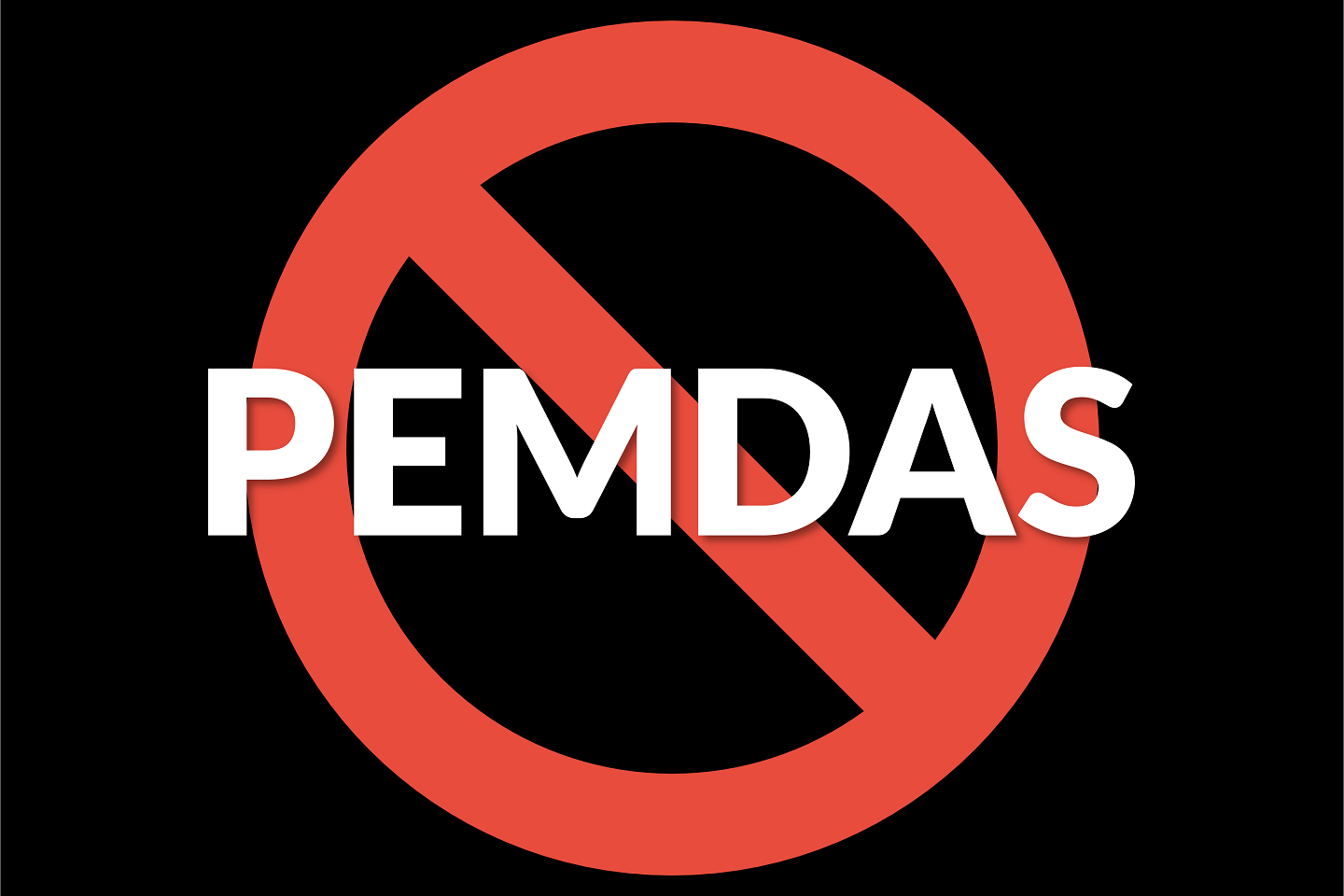 If you've read my past two posts, you know by now that PEMDAS* (Parentheses, Exponents, Multiplication, Division, Addition, Subtraction) is one of my most hated mnemonics.  There are two main reasons:

First of all, why is PEMDAS misleading?

Let's start with the "P" (Parentheses).  People claim that PEMDAS is "the order of operations."  This is already problematic because parentheses aren't really a mathematical operation.**  Operations do things.  Parentheses don't actually do anything - they just group things together.  This distinction may seem like more of a technicality, but it actually brings to light the main issue:  parentheses aren't the important thing, but the idea of grouping in general.  There's lots of ways to group expressions.

So in terms of grouping, PEMDAS is at best incomplete.

Though the "E" (Exponents) is pretty much unambiguous, the entire rest of the mnemonic causes problems.  By putting the "MDAS" in linear order, a number of students get the idea that all Multiplication should be done before any Division, and that all Addition should be done before any Subtraction.  Thus you get students who will make the following mistakes:\[4-1+2\\=4-3\\=1(?!)\]\[6\div2\times3\\=6\div6\\=1(?!)\]
What's even scarier is that PEMDAS has become so ingrained in our math education culture that some teachers actually teach it this blatantly incorrect way.  Don't believe me?  Take a look at this video from TED-Ed:

Try to tell me that doesn't lead you to believe that MDAS is done in linear order.  And we wonder why kids have trouble.

Of course, many teachers are careful to explain how the order of operations are supposed to work - that multiplication and division (which is just multiplication by the multiplicative inverse) are done in order from left to right as they appear.  Likewise, subtraction is just addition by the additive inverse, so addition and subtraction are done left to right as well.  Some teachers write the mnemonic as PE(MD)(AS) or in some other sort of arrangement to emphasize this fact.  Others further extend the ridiculous mnemonic-for-a-mnemonic to say "Please Excuse My Dear Aunt Sally ... and Let her Rest".

But now why is PEMDAS unnecessary?

There is a way to bypass all of this mnemonic madness and teach the order of operations in a way that actually makes sense.  How?

By teaching why it works that way.

When I've asked fellow teachers why order of operations the way it is, those who have been able to answer often gave something to the effect of "well, we needed to decide on some kind of convention to deal with possible ambiguity, so we decided on what we have today."  This is half correct - getting rid of ambiguity is very much important.  But it wasn't an arbitrary decision.  It's not like we could have just as equally decided that addition and subtraction come first, then multiplication and division, and then exponents.  There's a very good reason that the operations fall naturally in the order that they do.

Think back to elementary school when all you knew about was addition and subtraction.  Eventually you ran into expressions that looked like this:\[3+3+3+3+3+3+3\]You didn't want to write so many 3's, so you were introduced to a shorthand to write this expression.  Since there were seven 3's being added together, you learned you could instead write:\[3\times7\]Thus you learned that multiplication is repeated addition.

Fast forward a few years, when you had multiplication and division under your belt.  Now you saw expressions like this instead:\[4\times4\times4\times4\times4\]Again, you were introduced to a shorthand to keep from having to write all those 4's.  Since there were five 4's being multiplied together, you wrote:\[4^5\]Thus you learned that exponentiation is repeated multiplication.

Now we come to an expression like this.\[5^2+4\times3\]What do we do first?  Well, remembering that exponentiation is repeated multiplication, we rewrite our exponent to say what it really means.\[5\times5+4\times3\]Next, remembering that multiplication is repeated addition, we rewrite our multiplication in even more basic terms.\[5+5+5+5+5+4+4+4\]Now the expression is a cinch to evaluate - anyone can add!  The value just comes out to 37.  But, more remarkably, what we've just done is uncovered the reason why the order of operations is as it is:

The most compact shorthand is evaluated first.

Once students understand this, they won't need to actually write out the additions explicitly - they'll just evaluate things in the order they should be handled.  But they'll know why to do it.

With this in mind, I propose a better way to teach order of operations.  Students need only remember two things.

If we must use an acronym, instead of PEMDAS, let's use something like ... say ... GEMA.  (Grouping, Exponentiation, Multiplication, Addition.)   But if we do use GEMA or something similar, we shouldn't deprive students of the understanding that comes from knowing why the order of operations works.

* In other countries, variations on PEMDAS are used, such as BODMAS or BIDMAS.  The "B" stands for Brackets, another word for parentheses, and "O" and "I" stand for Orders and Indices, respectively, which are both alternate words for exponents.  Note that in BODMAS and BIDMAS, the "D" and "M" are interchanged - think about how much confusion that could cause for students!

** Thanks to Quintopia for pointing this out:  Parentheses in the context of computer science CAN in fact be thought of as operators which let the computer know to make a call to a subroutine.  It would be even harder to make this into an acronym ... unless it's a recursive acronym in which the G stands for GEMA, similar to how WINE stands for WINE Is Not an Emulator!