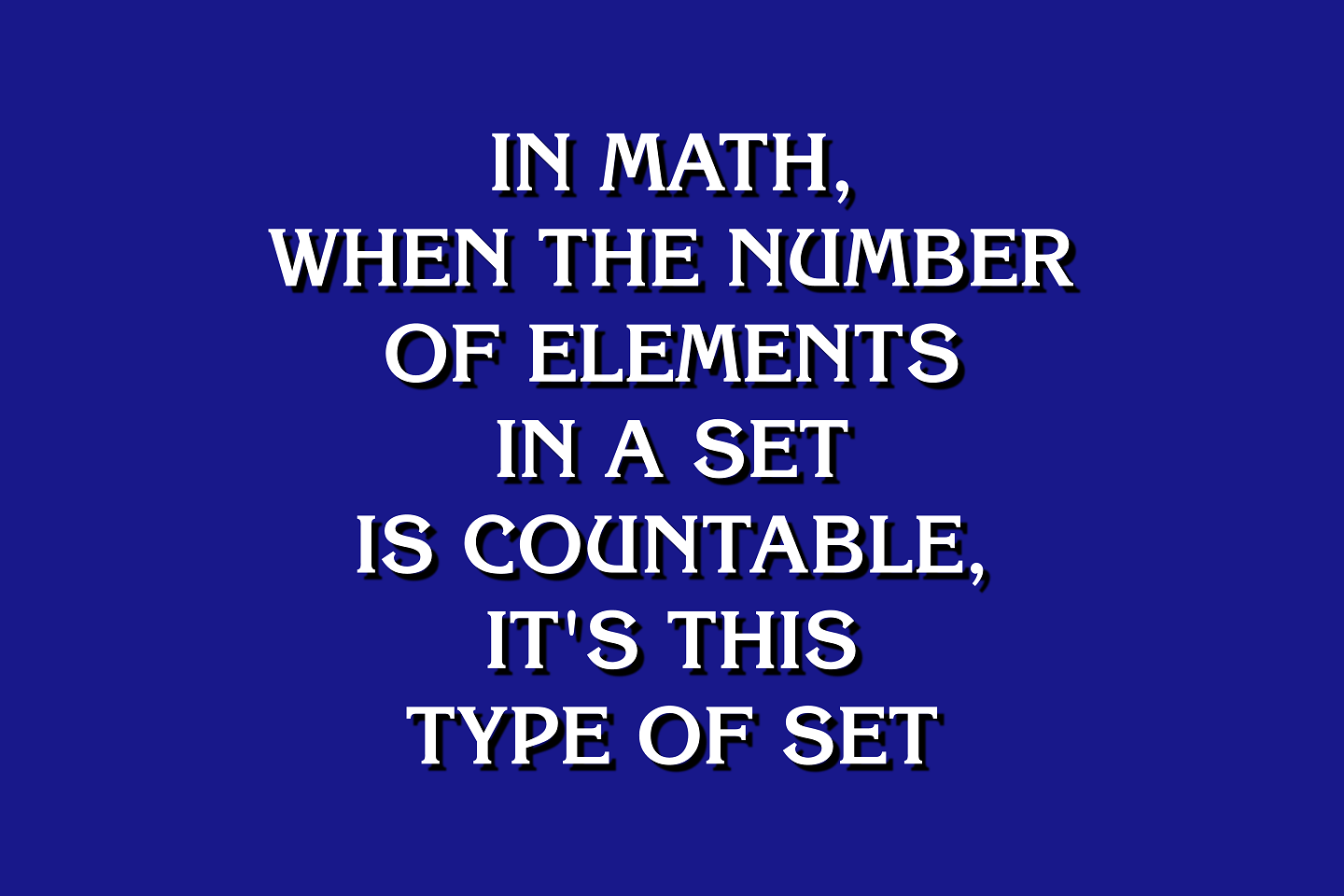 When Math is in Jeopardy!

(Forgive the somewhat dramatic title, but it was too good to pass up.)

I absolutely love game shows.  It's always fun to imagine you're there on stage ... or at least to yell at the people on TV when they don't know a question that was just so easy!

One of my favorite game shows, of course, is Jeopardy --- it has an air of intellectualism about it, with such an eclectic collection of topics.  I don't even mind that I'm admittedly pretty terrible at it... I always find myself thinking, "Man, if they just had some math questions, I could knock those out of the park!"

Well, a couple of days ago, as we were getting ready to celebrate the advent of 2019, I was elated to see that there was in fact a math question!  (Or math answer, rather.  You know what, I'm just going to call them "clue" and "response" to avoid confusion.)

The category was "Ends in 'ITE'", and the clue was as follows:

"In math, when the number of elements in a set is countable, it's this type of set."

As I was trying to think of what response would end in those three letters, a contestant buzzed in and said:

Alex Trebek notified the contestant that they were correct.

Meanwhile, I was speechless because I knew they weren't.

Well, at least not completely correct.  See, in math, words have very specific definitions in order to describe very specific phenomena.  In this case, the word "countable" is used in set theory to describe a set --- a collection of things --- that can be put into one-to-one correspondence with a subset of the natural numbers, \(\mathbb{N}=\{0,1,2,3,\ldots\}\).*  So, while finite sets are indeed countable, there are also infinite countable sets --- the integers, the even numbers, and the rational numbers are all well-known examples.  (That last one still amazes me --- in some sense, there are exactly as many fractions as there are whole numbers, even though it seems like the former should outnumber the latter!)

That means that the statement "When the number of elements in a set is countable, it's a finite set" is actually incorrect.

Naturally, I took to the internet to voice my displeasure with how my favorite subject was represented on national television.  When talking with a friend of mine (who knows more about game shows than I ever will), I learned that there had been two other cases recently where math-centric Jeopardy questions had issues with them in the past couple of months.

Now, in isolation, any one of these would be only a minor annoyance.  After all, there are plenty of clues on Jeopardy that have multiple possible correct responses, and contestants aren't expected to give all correct responses, but rather just one.

But the fact that questions about mathematics appear so infrequently on the show compared to topics such as history, combined with the fact that these kinds of details are not attended to, seems to send a message that mathematics is considered to be not as important, not worth researching fully in the spirit of the subject.

We already live in a culture in which any time I tell somebody I teach math, the inevitable response is "Oh, haha, I was never any good at math."  Somehow people seem proud to admit and even proclaim this.  I'm willing to wager (maybe even make this a true Daily Double) that those people would be much more reluctant to say something like "Oh, haha, I was never any good at reading."  There's a pervasive attitude that mathematics is a torturous and frivolous subject, devoid of the awe-inspiring beauty and sheer fun that those who embrace the subject know it to have.

With that said, I'd like to challenge the writers of Jeopardy --- and perhaps other game shows as well --- to make a conscious effort not only to ask more questions about mathematics, but to take care to do them well, perhaps even consulting one or more mathematicians to make sure the precision and nuance of the subject are properly represented.  (I know math teachers who have come up with versions of game shows for their classes with only mathematically-oriented questions... the students love it!)

It doesn't have to be something like "\(1\times 2\times 3\times 4\times 5\)"** either.  There's such a rich amount of material to pull from --- why not ask questions about, say, fractals?  Or famous mathematicians?  Or even unsolved problems (and those who eventually solved them)?  I would be giddy to see something like,

"Shot and killed in a duel when he was only twenty, this mathematician spent the last night of his life writing down what he'd discovered about quintic equations."

Doesn't that make you want to find out what the story was, why he felt fifth-degree equations were so important that he just had to share it, knowing he would soon die?  Mathematics is full of stories like this, and perhaps letting people know those stories exist, that there's more to math than doing arithmetic problems, might change how people view the subject.

Of course, if winning prize money is what you like about game shows, there's always the million-dollar Millennium Prize Problems...

* You might be thinking, "But zero isn't a natural number!"  As it turns out, there's no real consensus on whether zero is considered a natural number.  Some mathematicians choose to include it, while others don't.  To some extent it depends on your field of study --- for example, number theorists may be more likely to disinclude zero because it doesn't play very nicely with things like prime factorizations, while computer scientists are used to counting from zero instead of one.  Peano actually started off his axiomatization of the natural numbers with one being the starting point, but then changed his mind later and started with zero!

** This was actually a clue on a Kid's Jeopardy episode, under the category "Non-Common Core Math".  That will eventually be the impetus for another blog post in the future on the way we currently view mathematics teaching.